What Is Jun Kombucha Tea?

What Is Jun Kombucha Tea? 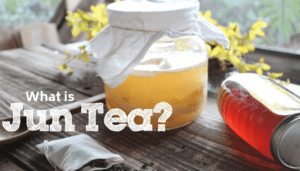 What Is Jun Tea?

Jun kombucha tea is like kombucha’s classier cousin. Often referred to as the “champagne of kombucha,” jun has a crisper, brighter flavor than that of traditional kombucha. It is brewed with green tea and honey rather than black tea and cane sugar, resulting in a delicate and delicious brew.

There is abundant uncertainty surrounding the whole idea of jun tea. Some argue that there is only one kombucha culture that is used for both drinks. Many, however, insist that the jun culture is a different makeup of bacteria and yeasts that survive better on the nutrients in green tea and the sugars in honey. To me, the latter makes a little more sense, given that honey brings its own population of microbes to the table. Honey has its own microbial population, which is the specific reason why it is not to be used with the traditional kombucha SCOBY. The microbes would compete with one another and could harm the SCOBY culture.

Tibet is said to be the hometown of jun tea. There it is held as a sacred elixir, where heirloom cultures are esteemed and lend themselves to experiences of enlightenment and energy cleansing. From there, cultures have said to have been “stolen.” Much of jun’s history is hear-say with little certainty of what to believe.

One thing is for sure; jun kombucha tastes fantastic. If you are one that took a while to warm up to traditional kombucha, jun should pretty easily win you over. The flavor is much more subtle and doesn’t get that vinegary tinge as easily. Even when jun does get vinegary (if you’ve left it over-ferment), it is not as offensive as black tea kombucha can get.

What I love about jun is, when fermented at the proper temperature, it has a short fermentation time of just 5-7 days. That’s almost instant gratification in the fermenting world. It also tends to be more effervescent, so you don’t necessarily have to do a secondary fermentation even though I usually do because the bubblier, the better, for me. The alcohol content can get a little higher of around 2%, though, just like traditional kombucha will vary from brew to brew. I have never tested my jun for its alcohol content, but when I do get around to it, I’ll pass on the specs! Until then, I wouldn’t give it to your kids or drink it if you’re pregnant.

I’m not sure if jun’s rarity is due to the fact that it is more expensive to brew or just because it is undiscovered. In my opinion, its flavor is superior to regular kombucha; it is fizzier, ferments faster, and can be more alcoholic! All the pros if you ask me. I don’t want it to seem like bashing traditional kombucha. I brew and drink both.

When I want to add bolder flavors, I do that with traditional kombucha. It holds up to the flavors much better. Jun is so delicate that many flavorings easily overpower it and throw off balance. If you’re going to flavor jun, it’s best to go with flavors such as pear or something that is equally as light and subtle to complement and not overpower the jun kombucha.

Go ahead and give jun kombucha a try. I think you’ll like it!

Did your SCOBY sink? Don’t worry; everything is ok!