How To Store Extra SCOBYs

How To Store Extra SCOBYs 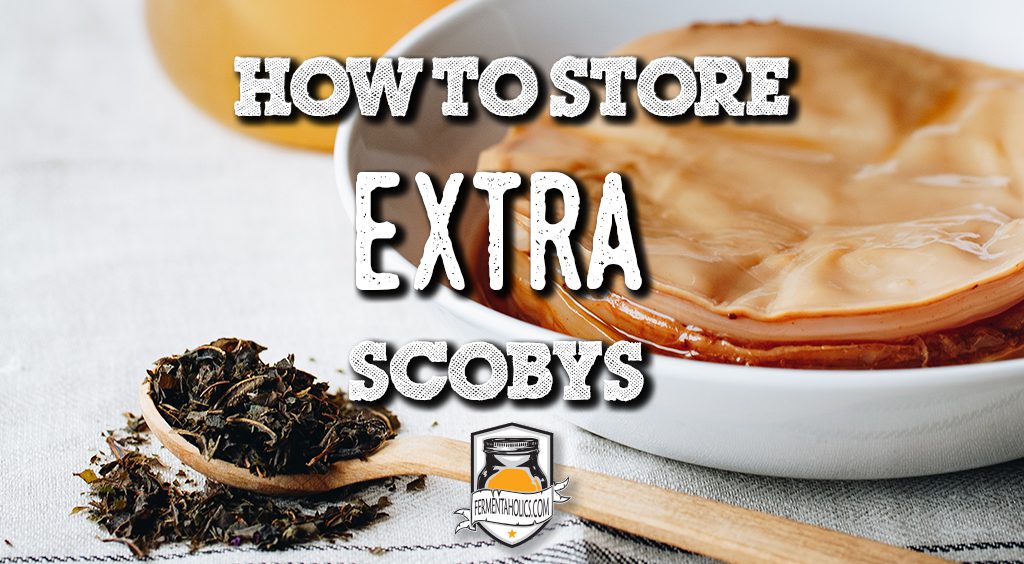 After brewing several back-to-back batches of kombucha, the question of what to do with extra SCOBYs inevitably arises. Each batch you make will grow a new pellicle on the surface, eventually leaving you with a jar full of pellicles and no space for kombucha!

What do you do with all those SCOBYs?

First, for the sake of correctness, I’d like to define what a SCOBY is.

Definition of a SCOBY

SCOBY is an acronym for Symbiotic Colony of Bacteria and Yeast. They are the living microbes in kombucha responsible for the fermentation and health benefits in our beloved brew. The microbes are named such because they are microscopic, in other words, not visible to the naked eye. This key fact is important when it comes to defining the pellicle.

What is a pellicle?

A pellicle refers to a membrane or skin. During kombucha fermentation, the bacteria create a cellulose membrane on the air-liquid barrier, which grows thicker with time. This little (or sometimes very big if left alone) pellicle has become the face of kombucha, sometimes referred to as the mother, mushroom, baby, or simply SCOBY. As you can see, referring to the cellulose membrane as the SCOBY, is not exactly a correct definition. While the pellicle is saturated with microbes by being immersed in the brew, it is not actually alive, and thus cannot be the SCOBY. The pellicles, despite their un-relation to the SCOBY, have given us somewhat of a way to communicate with that which we cannot see. We know you’re in there!

Now that we’ve cleared that up, let’s get to what to do with all those pellicles. There are a few options to choose from, varying in range from how attached you get to your pellicles as you spend time with your brews.

Want to keep them all? Create a SCOBY hotel! Not attached at all? Toss ’em!

What is a SCOBY hotel?

A SCOBY hotel is a popularized idea for preserving pellicles in a jar of kombucha. The kombucha will keep the pellicles safe and happy as long as they are submerged under the liquid. You can save them for whatever you wish–give to a friend, use in cooking, make dog treats, make SCOBY leather or jewelry, admire them as a feat of science.

How do you create a SCOBY hotel?

Maintaining a preservation tank for your pellicles doesn’t require much more than an extra glass jar and a bit of basic knowledge. Think of the kombucha as a pickling liquid. As long as the pellicles remain underneath the liquid (kombucha) they are safe! As kombucha ferments, it essentially becomes vinegar, never really expiring and creating a very safe environment. With time, some of the liquid will evaporate so you’ll want to keep an eye on the levels here and there. If the pellicles are allowed to dry out, they become susceptible to mold. A simple top off of sweet tea here and there keeps the SCOBY active and helps maintain a healthy level of liquid in your hotel.

Do you have to keep the extra pellicles?

Nope. You’re not a bad person if you throw away a pellicle. As brewers, we can get quite attached to the little buggers after watching them grow up. However, if you don’t want to maintain a SCOBY hotel, you don’t have to! After all, if you wish to extra pellicles in the future, just keep brewing kombucha, and you’ll have all that you can dream of with time!