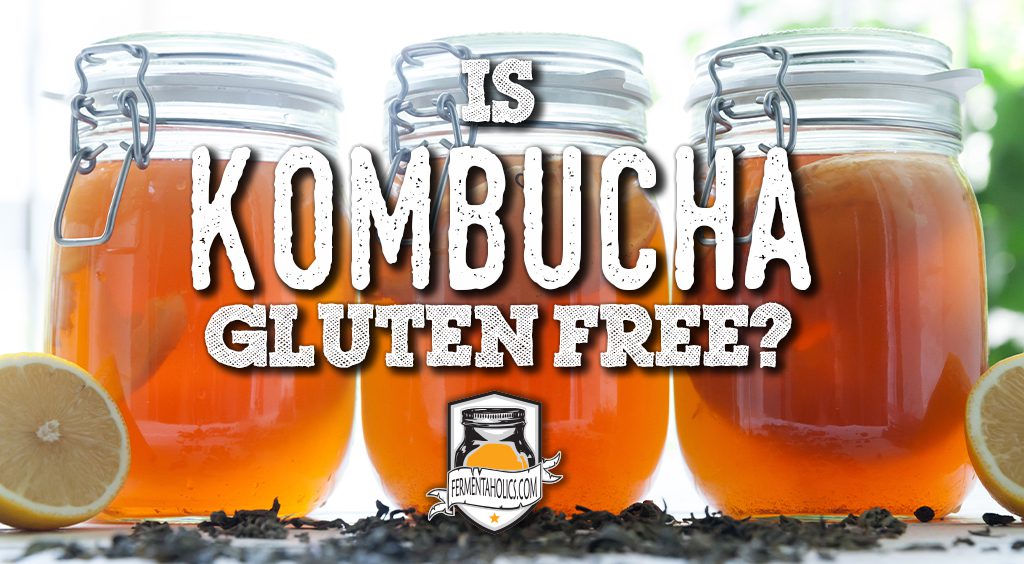 When I was first asked this question, it honestly threw me off. I was thinking “Of course kombucha is gluten free, it’s only sugar, tea, and matured kombucha.” As I received this question more and more, it struck some curiosity in me to figure out why people were asking this when, I thought, it was such as obvious answer. Kombucha is, in fact, gluten free, but I wanted to know where the confusion was arising.

What I quickly found was how complicated it can be for someone with Celiac’s disease or those who have gluten sensitivities to navigate through today’s ingredients lists. It seemed like gluten was everywhere!  Similar to corn syrup, gluten sneaks its way into products that you wouldn’t inherently think would have gluten.

IS ALL KOMBUCHA GLUTEN FREE?

Pure kombucha is naturally gluten free, since kombucha is made with only sugar, tea, and a starter culture. When it comes to commercialized products, however, you want to do your due diligence and read the labels carefully to make sure you know what you’re buying. This is another great reason to make your own kombucha–not only is it cheaper but you can control what goes into the final product. Need help getting started? See our post on how to brew your own kombucha.

WHAT FLAVORS OF KOMBUCHA COULD POSSIBLY CONTAIN GLUTEN?

Some companies make kombucha beer, using grains and barley to extract sugars and flavor, just like you would in traditional beer brewing. The barley makes these kombucha hybrids not gluten free. This option would most likely be sold in the alcoholic section of the supermarket but can be confusing because it says kombucha on the label.

Others that I would be wary of would be flavors like bloody mary kombucha where they might use soy sauce or kimchi brine (which typically has soy sauce).

If you see a weird or unique flavor, definitely pay closer attention to it than you would a fruity or more traditional flavor.

Yes! We do not use any products that contain gluten so you can safely produce your own kombucha at home.

WHAT’S THE CONFUSION WITH KOMBUCHA & GLUTEN?

Of the three ingredients in kombucha, the biggest component that brings concern is whether or not the SCOBY is gluten free. This confusion arises because yeast sometimes can be associated with gluten.

Yeast is inherently gluten free. The yeast cells themselves do not synthesize gluten molecules.

The confusion lies, again, in commercialized products. Commercially, there are different strains of yeasts that are propagated in labs and the question then becomes What was the substrate used for propagation?

Some commercial varieties include bakers yeast, nutritional yeast, instant dry yeasts, autolyzed yeast extract and brewers yeast. While most of these are gluten free, the latter two are propagated on barley and thus are not gluten free.

Kombucha SCOBYs are propagated on cane sugar and tea, meaning that they have not been exposed to any sort of gluten.

BE SURE TO READ YOUR LABELS

While most kombucha is going to be gluten free, I would stress to read the labels if you’re going buy store bought.

If you’re going to make your own, I’m happy to tell you that you can enjoy kombucha with the rest of us!

Have you found any kombucha brands that are not gluten free? What’s the most surprising thing you’ve found to not be gluten free?